All the pictures can be found Here.

Below are some sample pictures. If you attended the Rendezvous. Feel free to reply to this message with your comments, report, pictures, etc (or email them to me and I can do it) 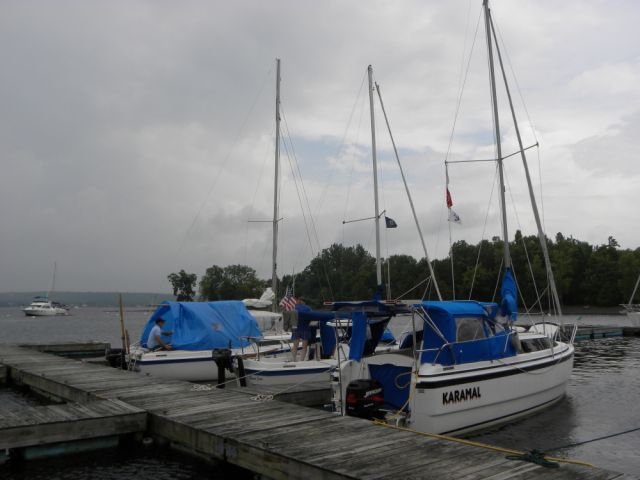 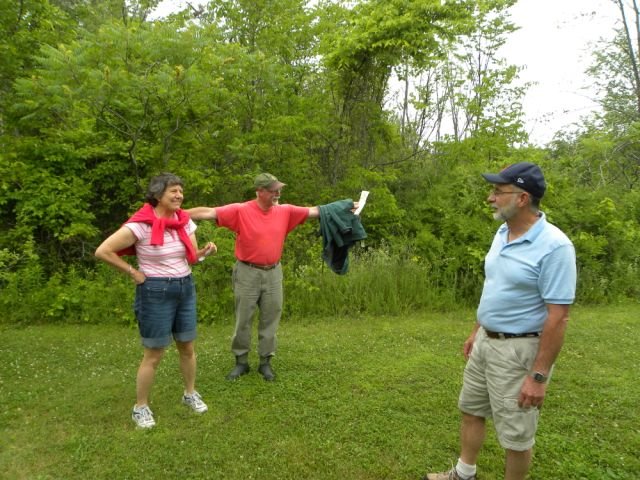 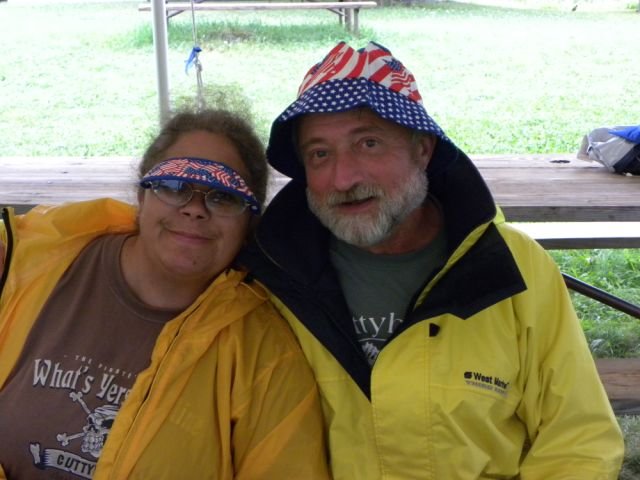 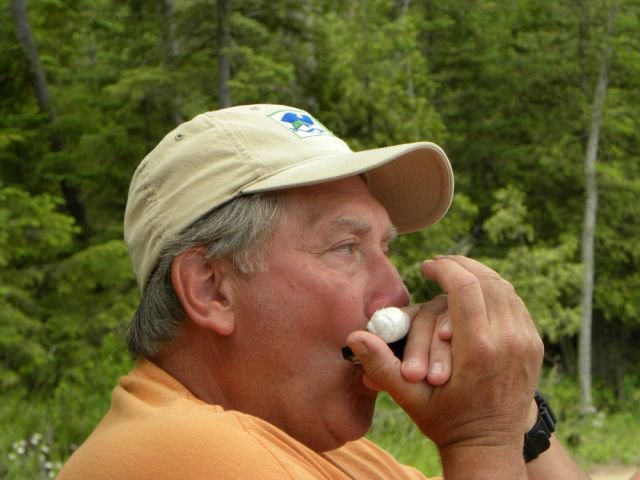 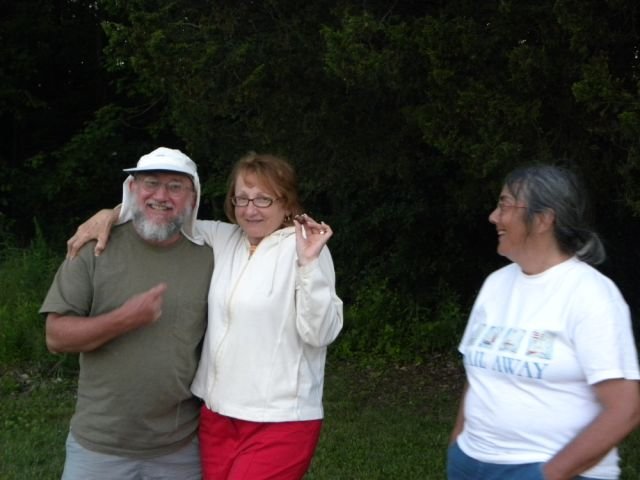 I haven’t sailed so little on a Champlain rendezvous as I did this year. That being said, it was still a fun rendezvous. There were many people missing – schedules didn’t allow them to come, car trouble, cancellations due to bad weather. Some people arrived early and left early. Some people arrived late – so the group was never all there.

Most of the boats launched at Kill Kare State Park in St. Albens this year. Our 2 early arrivals launched in Peru Dock near Valcour and at least one late arrival launched from Willsboro. Rumor has it that there is a new member who arrived after I left.

OK – so here is how it went. Loyd and I arrived and launched ‘Whale’ on Saturday early afternoon and motored to Burton Island. Al and Karen on ‘Karamel’ were already there as was Bill (a new member) on ‘Bonnie Jean’ – a Mac 22. The group was small enough to spend the evening on ‘Karamel’ and Karen fed us all chili for dinner.

Sunday morning dawned with no wind so all but Karen (who was taking care of a sore knee) walked the Islan. By afternoon, boats started arriving. Jim arrived on Sunday in his Venture 24 “’Pilgrim’ . He had been on the lake since the middle of the week and figured it would be nice to meet up with the group. Next to arrive was Gerold, Carol ans Willie on ‘3 Breezy Flees’ a MacGregor 26X. They moor their boat in Mallett Bay and had mostly motored up – as there was no wind. Jack, Rani, Cheni, Suki, and Cheni’s girlfriend arrived in ‘Zemmer Hayem” – a MacGregor 26s; Harry and Nancy on ‘ At Ease’ a Macgregor 26X and Ken and Judy on ‘Tryoomph’ a Corsair F27 catamaran all came in from Kill Kare over to Burton Island. Bob and Judy arrived from Mallett Bay in ‘Change of Heart’ a Cataline 36MkII. We were up to 9 boats.

So what did we do – had a brief skippers meeting to decide we were going nowhere on Monday if the weather was as reported – RAIN. The weather man got it right so we spent the day under the tent by the snack bar. Jim left at about 3pm as did Bob and Judy– after the rain stopped. We heard from Jim later in the week – he had gone to Deep Bay. We had happy hour and made plans for Tuesday.

Tuesdays weather report was for thunder showers in the afternoon so we planned to head out early (8am) We did great (unusual for the group) and made the bridge opening at 9:30. We all headed for Plattsburg. The weather man got it right again. Though we would have missed the showers, Frank and Diane on ‘Endurance’ a MacGregor 26M got caught in a shower as they launched in Mallett Bay. We all had dinner at the Naked Turtle. What a great time we all had.

On Wednesday, while some people sailed, Harry was the tour leader for a group of us touring Plattsburg. We visited some shops and a used book store and in general got “out of our boats for a day. Al and Karen crammed a lot of us on their boat for a quick happy hour and we all headed to our boats for dinner.

OK it was time to sail (but not to far as the weather was iffy again) and we decided to head to Valcour Island. Jim reported that the beach at Butterfly Bay had a lot of ‘junk’ on it so we opted for North Bluff beach. We missed Jim as he headed home, but we had a great happy hour – but no fire as the rain set in.

Friday morning, Bill left from Peru dock, a short distance away and Loyd and I headed back to Burton Island for an early hauling on Saturday. We needed to be in Maine by Saturday night. We pulled out of Valcour to see the darkest clouds we had seen all week just behind us. There we were sailing in the rain. Thank goodness there was no thunder and lightning. We were hit with 2 more showers on our way. No major winds, but we had to wait for the bridge to open for over 40 minutes as there was a thunder storm in the area. We hunkered down in Burton Island and headed out early Saturday.

Have heard some stories about the rest of the weekend – no fireworks, strong winds sailing back to Burton, pictures of Bob and Carol (sorry we missed you) and some music (with Harry on the Harmonica).

Someone else will have to tell that part of the story.

As for us, ‘Whale’ is home for the rest of the summer and ‘Serenity’ is now in Buzzards Bay heading south (well actually sitting on a mooring in Pocasset harbor while it rains yet again). Hope all have a great ‘rest of the summer’

Thanks for the photos posted on the champlain trip.

I arrived before the gathering and put in at Peru Dock, NY. I spent Thr & Fri, with 'Change of Heart in Vt.
Then sailed to valcor Island on Sat. I joined the group at Burton Island on Sun eve. The rains came. I seporated from the group after the first full day of rain on Burton Island. Monday nite I anchored alone at point Au Roche St Park, Ny ( Deep Bay) Then motor sailed back to Valcor Island the next day; while the group headed from Burton to points farther south. (my little 4hp motor was a good bit slower than the rest)
Valcor was very nice for two nites and I am sorry I had to leave the lake on Thursday.(from Peru Dock NY) So I did not meet folks again at the Butterfly Bay gathering. All went well for my solo trip for the second time at Champlain(08, 09) I wish to claim the honors for the oldest mac on the lake (Pilgrim 1973) Which proves the idea
' old macgregors never die they just keep sailing into the sunset'

Users browsing this forum: No registered users and 1 guest