We have been sailing to Provincetown, from Marion, on Mildred Rose for the past few years. This year we decided to do a couple days there, add 2 days for travel days, as it takes about a full day to get there.

We departed Marion Friday morning. Not a lot of wind, We had time to make it to the canal in time for the current change to flood. We entered the canal, motored our way down the canal. very nice trip through the canal, uneventful, but fun. This, however, was the first time we saw the railroad bridge down. Kind of intereting watching it go up and down. 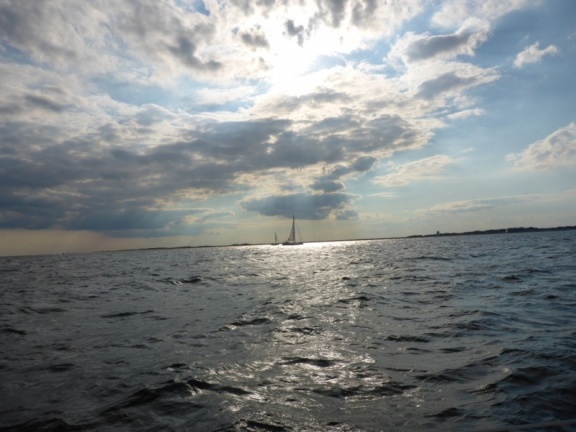 There was a transient boat at our Marina, 'Yumi' a very unique color hull. Apparently they were going to Provincetown as well. We met up with each other when the bridge was down.

Once through the canal, we tried sailing, but there was not enough wind, and it was coming from the wrong direction as well. So we motored from the canal to Provincetown, about 25 miles across.

We got to the marina, Provincetown Moorings. We got to our mooring, settled in for dinner and relaxed after a full day on the water. In the morning, we called the launch to bring us to the dock. We went into the heart of town - Commercial street. walked up and down the street. had some coffee in a small coffee shop. weather was nice and warm.

The town was getting ready for Carnival, a street fair they have annually. we were, however, not going to be in town for the fair.

We were also looking to eat out for the evening. looking at the menus at the countless restaurants on the street. We settled on a nice place - Pepe's on the water. Nice place. had to wait a bit, not uncommon for a Saturday night. Dinner was quite good, as well as the service.

Sunday we walked around town again, and also went to the Pilgrim monument. Always a good take. Great museum and the monument is awesome. We didn't climb it this year, as we have done in years past. After the museum and monument, we had to search for Radio Shack, as we needed to get a cord for Millie's iPad. We located one a few streets away. We walked there, it is actually located inside an Ace Hardware store. Kinda different, but they had it.

We walked around town and had more coffee and headed back to the boat to cook some dinner.

Monday we went to town again to pick up some Salt Water Taffy for the group in work, and to get ice for the cooler for the ride home. Once it was time to leave to make the canal, there wasn't a lot of wind, and again, it was coming from the wrong direction. So we motored again, toward the canal. I put the autopilot on, and set the course and speed to get there at the right time.

Crossing the bay was nice, quiet, uneventful. entering the canal, we were a bit early for the current, so we had some current against us. This was intentional, as we wanted to minimize the waves and wind on the exit of the canal. So I wanted it to be near slack when I got out. The sun set while we were in the canal. was nice and quiet in the canal at night. When we exited the canal, was a pretty site, the red and green channel markers lit up a magic carpet lane - very easy to see and follow.

Since it was getting late, and there was a lot of cloud cover, there was not a lot of moonlight, so it was darker than normal. We navigated back to Marion, picked up the mooring and waited for morning for the launch to pick us up.
Paul S

"Mildred Rose"
1968 Ohlson 38
A boat is never 'finished', if there is nothing for you to currently work on, it is merely 'resting'.
Top

Re: 2013 Provincetown trip on Mildred Rose

Looks like a great trip Paul and Millie.
Thanks for sharing it with everyone!!
Top

Re: 2013 Provincetown trip on Mildred Rose

Users browsing this forum: No registered users and 2 guests